Still nothing significant found.  An apparent false alarm was raised last week when two chert chips were found in the trench being dug around the central stone.  At first I thought I could see signs of working on both, but with more magnification and light on the subjects, it ain't so. 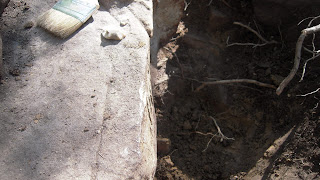 The two little chips are shown on the south edge of the central stone, with a trench about 12" below the stone's top surface.  I'm rather perplexed how they found their way here, buried a few inches below the grade level, under a man-made rock pile.  Underneath is about 30 feet of sandstone, capping limestone.  Sandstone is not known to harbor chert.

How was the chert transported to this locale? 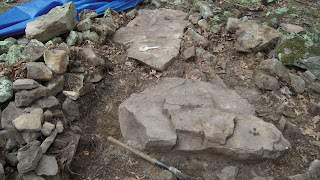 The above image shows the context of the central stone nearest the shovel and the second stone that extends nearly to the outer periphery of the cairn on the south side. 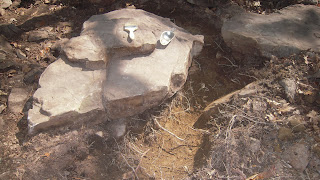